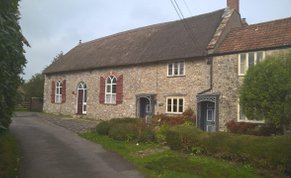 St Margaret’s Lane is the oldest part of the village

and a great place to stay for your holiday whether

it is a couple fo weeks or just a few days.

A roman villa or farmhouse was discovered at the

back of St Margaret’s Lane this may be connected

with a Roman Tessara which was found in the area

and was excavated in 1967. Pottery and Paving

from there are displayed in Chard Museum.

During the Norman era, a Chapel of Ease

dedicated to St Margaret was built in St

Margaret's Lane This chapel was the earliest

placeof worship in the village and may have been associated with pilgrims on their way to Lyme bound for Santiago de Compostela.The Old Chapel in St Margaret’s Lane andthe two cottages adjoining to the east are grade 2 listed. St Margaret’s Chapel was built circa 1400

The medieval chapel was converted into a Baptist Church and manse with a second cottage added in 1836. The church was converted into a dwelling in the
late 20th century but is still owned by the Strict Baptist Church. This building is currently undergoing a lot of renovation so that it can be offered as a holiday let but only to people who adhere to the Strict Baptist faith. The pulpit from the Chapel is now displayed in Chard Museum.

Rose Cottage was built in the late 19th century and was originally 3 dwellings. One of the dwellings was knocked down and the 2 dwellings left were converted into one house. There were further extensions built to the cottage in the 20th and 21st centuries.

The current Parish of Tatworth and Forton was created in 1986 from several hamlets which were once separate: Tatworth, South Chard, Perry Street, Chard Junction and Forton. The first three merged during the 18th century. Chard Junction dates from the coming of the railway in the Victorian times. However the history of these villages go back to Roman Britain.  Tatworth is derived from the Saxon "Tata's worth" ( the enclosure of Tata, probably a local tribal leader) and "Ford tun" ( the homestead by the crossing place).

Medieval agricultural prosperity led to the construction of some of the buildings that still survive
throughout the parish, cob and thatch long houses, some being "manors" and others being farms or
"bartons". By Tudor times  milling, glove making and especially woollen cloth weaving started to appear. As these activities turned into lace and net manufacture , mills started to appear at Forton, Blacklands and Perry Street. During the  Industrial Revolution brought more factories and village expansion.

Some ancient routes pass through the parish. The oldest is the Fosse Way built by the Romans soon after their invasion of Britain in the first century AD. The Fosse Way stretched from Lyme Bay to the Humber and divided "Romanised" lowland Britain from the wild upland regions. The name "Fosse" or "Foss" comes from the Saxon for "ditch" or " defensive embankment". The 'Fosse Way' follow the B3167 through Perry Street and South Chard.

Another ancient road dating from mediaeval times was the old pack-horse way once called the
"Cloth Road" (now the B3162) through Forton. Along this route wool traders carried their goods to Bridport and then on to West Bay harbour. A third very straight track known as The Drift was created at the time of the "enclosures" in the 19th century to give local farmers access to their newly-created fields.

A more recent route through the parish runs along the line of the old railway from Chard to Chard Junction is the "Stop Line , a defensive barrier created during the Second World War from Seaton to the Severn estuary at Burnham effectively cutting off the South West peninsula in case of a German invasion on the Devon coast. The route is marked by lines of pill boxes and "dragons' teeth" concrete bollards. Many of these still survive today.

There are many springs in the area, one of which rise in the ancient water meadow called Stowell
Meadow, a Site of Special Scientific Interest. Following the commons enclosure in the early part of
the 19th century Stowell Meadow in Tatworth remained common land. The farmers with grazing
rights agreed to let this watercress meadow annually. Every year an unusual custom called "Stowell
Court" is still held at The Poppe Inn, one of the oldest inns in the county. Certain properties in the
parish retain the right to Stowell Meadow and their owners attend an annual auction at The Poppe Inn.

One inch of candle is lit in a securely locked room and the bidding begins. Bidding ends when the flame expires and the last bidder has the meadow for one year. T

Acknowledgement: Our thanks to the authors of the Parish Plan for allowing us to draw on
the content of their history section. Much of this information chas been derived from the Tatworth and Forton website.

Useful information can be found at the following websites:

There is a Spa and Post Office in the village, just 5 minutes walk away through the recreation ground.

Chard which is 2.5 miles away  is well served for supermakets including Sainsburys, Tesco, and Lidl

The nearest leisure centre is in Chard 2.6 miles away

The nearest cinema is in Lyme Regis, 10 miles away.